Wednesday morning, on Rosh Hashana’s eve, an unusual crowd was populating the supermarket. A horde of men, grocery list at hand, phone stuck to the ear and a terrified look in their eyes was wandering in the unfamiliar alleys. In front of the dairy products section, I stand there with my earplugs, trying to decipher the labels next to two of those specimen. One turns toward me and probably asks me which cream he should take for some dish. Although I couldn’t hear what he was telling me and wouldn’t be able to understand it anyway, he decided that my opinion was more reliable than the other member of his species standing next to me…

Rosalind Franklin, who actually discovered the structure of DNA but whose merit was attributed to Watson and Creeks.

Even though Israel is not the worst country for women (the fourth Prime Minister or the president of my university are women), it feels like the society is still very chauvinistic. When cabdrivers constantly question how comes you are not married at your age, or the delivery guy at the university asks you every time if you finally found a husband, you seriously wonder if men will ever take you seriously or simply think that you are just fooling around before diligently going back to the kitchen.

In the movie “Before Midnight”, the female character shows how she is struggling to combine her family and her professional ambition. Although she got on my nerves for being too much of a feminist caricature, she makes a good point when she states that women lack young role models, famous figures we could look at and think “She did it at the age of 25/30/40, I can do it too”. And I can’t help but thinking that being a woman nowadays is not much easier than 50 years ago.

When in the past it was expected from everybody to be married by 30,  our generation has more options than any other before us: not only are we allowed to choose a carrier with (generally) no social pressure but we can also decide in which country we want to live and according to which life style. It’s completely okay to be a successful 38 year-old banker in London, with no wife and no children, and it’s also fine to be a 25 stay-at-home mother.

At least in theory. Because I can already hear my successful girlfriends (including myself) saying “What, stay-at-home mom? At 25? What’s wrong with her??”. But what about a successful 40 year old single female manager in a multinational company? Pretty sure that people will think that there is something wrong with her too. And that’s my problem: it seems that no matter what we, women, do, something will feel quite wrong.

I have many female friends, brilliant, very smart, beautiful, who are struggling to find a boyfriend. Whether they be scientists, entrepreneurs, doctors, engineers etc… they all face the same dilemma: how to reconcile a promising carrier with the idea of having a family. Not to mention that it looks more and more like most men are scared of independent women. It is probably true that we don’t need men most of the time: we can live well with our own salary, carry our groceries up the stairs, walk home late at night without being scared, or buy ourselves jewels whenever we feel like it and some of us can easily build a shelf, fix their car or find out how to do right-click under Windows 8 when the mouse is broken… But the truth is that we would all love to have someone to take us on a romantic date, who would carry stuff for us when it’s very heavy or hold our hand when walking in a dark street. Independent women are not different from others; they just learnt to do things by themselves because they have no other option anyway. 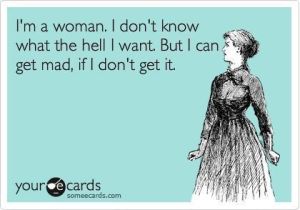 The worst in all of this is that if it was only up to us, we would probably be completely fine with our freedom, traveling, having fun and no string attached. But when your Facebook feed is filled with wedding and baby pictures and the social pressure is getting stronger, it’s becoming more and more difficult to ignore it. Even when you are not sure you want kids, your biological clock is still ticking. “If I wait 35 to have kids, won’t I be an old mother?”

Anyway, I am confident that all those brilliant women who succeeded so well so far will be able to find a smart way to make everything work as usual, as well as a man who can appreciate them for that.

One thought on “Modern Times and the X Chromosome”